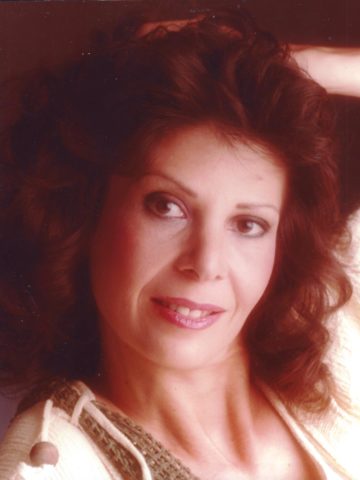 Departed on June 27, 2020 and resided in Nashville, Tennessee

Virginia “Ginger” Danna Maddi Smith- Age 75, of Nashville, passed away June 27, 2020.
She attended Blessed Sacrament School, Incarnate Word Academy, Mount Carmel High School, and Austin High School. She was awarded a scholarship in Drama and attended Sam Houston State University in Huntsville, Texas. Ginger loved to dance. In high school, Ginger was a featured dancer on KTRK’s The Larry Kane Show. She was part of a small group chosen to make the trip to Philadelphia to dance on Dick Clark’s American Bandstand. After being set up on a blind date by a mutual friend, Ginger met a handsome young local musician named Gary Smith. Gary says that he knew as soon as he met her, that Ginger was different than any other girl he had ever met before. She stole his heart that night, and she would always and forever be his girl... no matter what...she will remain the love of his life. They began their union as man and wife in October of 1962. The young couple made their home in Houston joined quickly by their daughter Danna, and soon after that, son John Gary Smith Jr... Their life together was always an adventure. Over the years, Ginger raised her young children, taught dance lessons at Dance City USA, worked various jobs in retail, was the co-owner of several successful establishments, worked in the medical field, spent time as an amateur forensic scientist, and was almost always running some type of self-employed entrepreneurial business on the side. She was an extraordinary artist who enjoyed learning, and using different techniques in her artwork. Hobbies included travel, gardening, reading, shopping, and cooking. Ginger made the best meatballs ever...this is not an opinion...it is a fact. She loved music, especially her husband’s music. She was Gary’s biggest fan and loved life on the road! Most importantly, she loved Jesus, and she loved to pray for others. She prayed for everybody, and any situation you asked her to pray for...it was as if she had a direct line to God at all times. Her family was her pride and joy and Ginger had an amazing relationship with her children, grandchildren, and great grandchildren. She gave so much of herself to everyone and in return, she asked for nothing. She will be greatly missed, but her family finds comfort knowing that she is watching over them all from her front row seat in Heaven...with all of her animals snuggled up in her lap. Ginger had a V.I.P. backstage pass for sure!!!
Preceded in death by her parents Frances Ignacia Danna Maddi and Thomas John Maddi. Survived by her loving husband of 58 years J. Gary Smith; children Danna Fox Smith Lynde (Hal) and John Gary Smith, Jr. (Mandy); 7 grandchildren Justin Fox (Erin) Whitney Moore (Daniel), Gabrielle Rota, Dominic Rota (Lauren Kisner, Fiancée), William Lynde (Arden Johnson, Fiancée), Cason Smith and Keeley Smith; 6 great-grandchildren Benjamin Fox, Charlotte Fox, Annie Moore, Mary Elizabeth Moore, Margaret Moore, Stella Fox and Mary; sister Frances Maddi Harris; several extended family and friends.
A Life Celebration will be held 2:30pm, Sunday, July 12th at The Pavilion at Harpeth Hills Funeral Home. Visitation will be 1 hour prior to the service.
Harpeth Hills Funeral Home 9090 Hwy 100, Nashville, TN, 37221, 615-646-9292, harpethhills.com