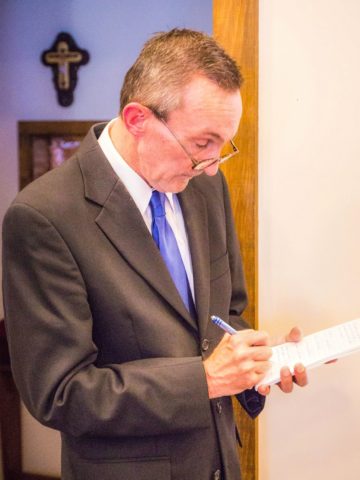 Departed on November 13, 2020 and resided in Nashville, Tn

He was born on the South Side of Chicago, Illinois on July 29, 1962, the second of three boys born within three years of each other to Robert Henry Shaughnessy and Patricia Houlihan Shaughnessy—there was never a dull moment in the household. He moved to Nashville with his family in 1974 and graduated from Father Ryan High School in 1980. In 1984, he graduated from the University of Notre Dame, where he studied English, boxed, and issued wry commentary from the porch of Sorin Hall.

He began his journalism career as a reporter for the Tennessee Register, the newspaper of the Catholic Diocese of Nashville. Several years later, in 1992, Tom moved to Lexington, Kentucky to serve as Communications Director for the Diocese of Lexington. There his duties included writing for and serving as editor of Crossroads, the diocesan newspaper, which won thirteen awards from the Catholic Press Association during his tenure. In addition, Tom served as the diocesan public information officer and, for a time, hosted a weekly radio show called “Catholic Roundtable.” He also traveled with diocesan groups to Italy, Greece, Ireland, and Israel, and participated in trips to Haiti and Nicaragua to build housing for rural residents there.

He took early retirement in 2018 to move back to Nashville and care for his parents so they could spend their final months in the home they loved. During the past year, Tom worked as a freelancer writing for various Catholic and community publications.

Although many generations removed from the Old Country, Tom was a consummate Irishman and proud of his heritage. His social media handle was “Tomasin O’Seachnaseigh,” the Gaelic version of his name.

He was a dreamer, a storyteller, and a friend to many. He made virtually a second career of serving as a best man and, later, a godfather. He had no tolerance for pomposity and pretension; he managed to resist the craft beer craze. He was a Springsteen fan, naturally.

You can tell a lot about a man by what he reads. When Tom died, his nightstand contained books by Ernest Hemingway, Joyce Carol Oates, Seamus Heaney, and Charles Bukowski. In slightly different circumstances, he would have published a novel or two of his own.

Tom was preceded in death by his parents, Robert Henry Shaughnessy and Patricia Houlihan Shaughnessy. He is survived by his son Maximilian Shaughnessy (Carly) and granddaughters Katheryn, McKenzie and Kailey, of Richmond, Kentucky; his brothers Robert Shaughnessy (Susan) of Washington, D.C., and Christopher Shaughnessy of Lexington, Kentucky; his aunt Mary Ellen Horrell (David) of Dunedin, Florida, and uncle John Houlihan (Mary Jane) of Chicago, Illinois; cousins Kathleen Spayer (Roger) of Sugar Grove, Illinois, David Horrell (Shannon) of Brentwood, Tennessee, and Sean Houlihan (Elizabeth) of Chicago; niece Emma Shaughnessy and nephew Henry Shaughnessy, both of Washington, D.C.; and dear friends Mark and Lauretta DeMille of Nashville and Philip Von Mann of Lexington, and their respective children, who were family to Tom. Tom’s family would also like to express its special gratitude to his friend Teresa Clepper, who gave him valuable support during his illness.

A funeral service and a proper Irish wake will be held after public health restrictions are lifted.

No obituary can do full justice to the life in question. This one falls particularly short. Tom Shaughnessy was a good man. Let us remember him fondly.