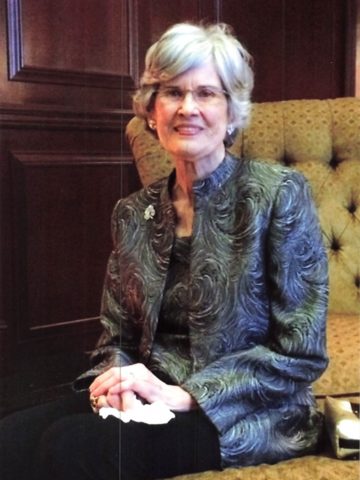 Departed on December 4, 2020 and resided in Nashville, TN

Kay passed away peacefully on Friday, December 4th at the age of 99. She was preceded in death by her husband, Bob Butterworth, and her parents, Bertha and Andrew Olson and her brother, George Olson.
Kay was born at her parent’s home in Platte Valley, Nebraska on March 7th, 1921. Her family moved to the small town of Hershey, NE where she grew up during the depression working for her parents at Olson’s Cafe and Service Station. After graduating from Hershey High school in 1938, Kay attended Kearney State College for two years before transferring to the University of Nebraska where she graduated with a degree in Dietetics and Institution Administration. She was a proud member of the Sigma Kappa sorority. Kay completed a dietetic internship at the University Hospital in Omaha. She met Lt. Bob Butterworth when she returned to Lincoln while he was serving at the Lincoln Army Air Force Base during World War II. They married on August 14th, 1943 and were married over 66 years before Bob’s death in 2010.
Kay and Bob moved to Bob’s hometown of Mayfield, KY in 1945. In Mayfield, Kay worked part time as a dietitian at Community Hospital, was an active member of the First Christian Church, enjoyed being a homemaker, and was involved in Bob’s feed and grain business.
In 1981, Kay and Bob moved to Venice, Fl where they enjoyed their retirement years until 2005 when they moved to Nashville to be closer to family. In Venice, Kay enjoyed her bridge groups, entertaining friends, and was active at the Venice Christian Church. While living in Nashville, Kay was a member of the Belmont Garden Club, a longtime resident of the Rokeby Condominium, and a member of Woodmont Christian Church. She loved her church and participated in CWF, Circles, GEMS, and her Sunday School class. Kay was extremely proud that she was awarded a lifetime membership in the American Dietetic Association.
Kay was known by all for her lovely, radiant smile and her gracious manner. She was a kind, strong lady who loved her family and friends. Kay was a very giving and devoted wife, mother, grandmother, and great grandmother. She is survived by her daughter, Pat Malone and her husband, David, her grandsons, Dave and his wife, Kristen and Michael, and his wife, Chrissy, great grandchildren, Jack, Alli, Clayton, and Wilson. She is also survived by her niece, Georgena Arnett of Loveland, CO, nephew, Andy Olson of Hershey, NE, nephew, John Galloway of Nashville, and niece Ruth Daughaday of Murray, Ky.
The family would like to thank all the staff at Abe’s Garden for the tremendous care and love they provided Kay to make the final 3 years of her life the best they could be.
In lieu of flowers, donations can be made to Woodmont Christian Church, 3601 Hillsboro Road, Nashville, TN 37215, Abe’s Garden, 115 Woodmont Blvd, Nashville, TN 37205, or Alive Hospice, 1718 Patterson St., Nashville, TN, 37203.