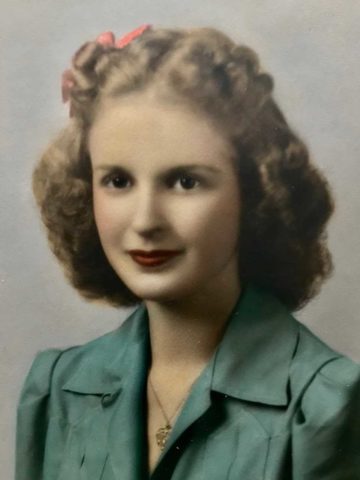 Departed on April 26, 2019 and resided in Nashville, Tennessee

Pauline Devore Ramsey’s actual first name was Elba. “Elba Pauline” she said, her voice arching. “It’s the name of the island where Napoleon was exiled. When I was little, a boy teased me and called me ‘Elbow.’” So, that was that, Pauline it was. Her early life highlights are firmly American, 20th century, even Capra-esque. Born in 1923 in Cape Girardeau, Missouri, she was the only child of Leila Devore, a provisional mother who doted and Virgil Devore, a jovial father who unionized the local shoe factory. Pauline went on to excel at school and become a teacher, also working nights as the bookkeeper at the union hall to make ends meet. She even traveled to New York to compete in Winner Take All, a radio game show. Smart as a whip, after a four-day run, she was the winner that took all.

Less idyllic were a later divorce, raising four children on a meager salary in the ‘60s and ‘70s, and her eventual victimization by Alzheimer’s disease. Cruelly, her memory diminished but not her awareness of its erosion. “I used to be smart.” she’d protest. For eight decades, her intelligence and her independence were central to her self-construction. But by her mid-80s both were slipping – in her view. “Intelligence and memory are completely different.” we’d say. She wasn’t buying.

In the throes, but free of self-pity, she constantly asked “Why can’t I remember things now, but I can still play the piano?” This was not rhetorical – she wanted to understand brain function. Foundational to family lore was a trade her father made with a local piano teacher when Pauline was a child. The teacher could use the Devore house to teach piano to students from the elementary school across the street in exchange for Pauline’s free lessons. Even in her 90s Pauline remained musically accomplished with remarkable stamina, playing for hours on a piano bench that others found painful after 30 minutes. A music anthology “Reader’s Digest Popular Songs That Will Live Forever” was her go-to.

The sheet music collection was a lime-green hard bound volume that lived in piano benches across the country in the late 70s. The songs were frequently introduced by sketches. A marching band for Seventy-Six Trombones, a Victorian town square for People Will Say We’re In Love, palm trees for Begin the Beguine, and harbor lights for Harbor Lights.

Eventually, Pauline’s fidelity was to notes more than to rhythm. Pieces sputtered, halted…then resumed, but were still recognizable.

To most she played to remain occupied – but really she played to remain. To postpone the drift. To tether herself to soundness against the appalling pull of the void. To stay the person who only the year before had hiked the hills of Percy Warner park. To stay the woman who refused to have a man tell her what to do. To continue to track the Cards losing to the Red Sox as she’d listen to games through ridiculously large headphones. To remain fired up (in her father’s stead) at companies that exploited workers. But she was losing her grasp.

As the grip slackened, the circumference of her life tightened. Initially she could at least be engaged with life statistics. Where was I born? What were my parents’ names? Is my first name Elba, or Pauline?

Then, the music stopped.

Toward the end we delighted if she could recall she had four children, even if she couldn’t recognize them. We hovered and scanned her face for recognition, only occasionally finding a glimmer. We grieved our own transition from beloved family to beloved family caretakers - counting Seroquils and delicately peeling Exelon patches off her paper skin so as not to cause pain.

Her full cohesion with us was lost, along with awareness of grandchildren, or the states of Tennessee and Missouri. The tether of the mind had broken. And on April 26th, 2019 her body similarly was no longer bound.

Although we can hope that certain life experiences are so indelible that age can dim but never erase them, it isn’t true. But we can pretend. We can honor her life by choosing to hear Elba Pauline (before her exile by Alzheimer’s) wander over to the out-of-tune spinet and conjure Rogers and Hammerstein or Gershwin’s lie…

…not only to be entertained, but to survive. She died just a few days shy of her 96th birthday.