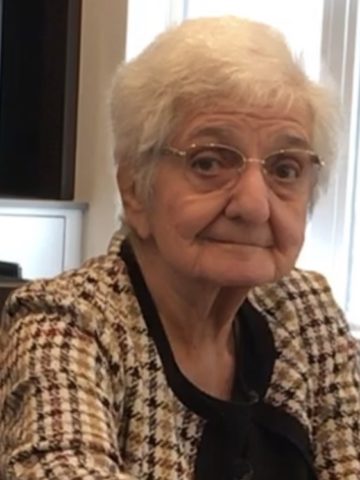 Born in Philadelphia, Pennsylvania on December 14, 1930

Departed on April 16, 2020 and resided in Nashville, Tennessee

Mary Elias, known as “Mother Mary” and “Mommiee”, 89, of Nashville, passed away peacefully on April 16, 2020, with her daughters and granddaughter by her side. She is preceded in death by her husband, John Elias; parents Joseph and Mina Madoo; brother, George Madoo; sister, Jenny Sargis; and grandsons Johnathon Maldonado, Justin Webb and Brock Forsgren.

Born December 14, 1930, as Shameria (or Shameira), her name proved difficult for others to spell, so her father solved the dilemma by calling her “Mary.”

Mary loved recalling stories of happy childhood vacations to Washington, D.C., where she and her siblings climbed the Washington Monument’s 900 steps, writing their names on each one. Her favorite time to visit was during the Cherry Blossom Festival and, on one occasion, she and her family were privileged to meet President Franklin D. Roosevelt. Mary’s family took her to the New York World’s Fair when she was nine, where she saw her first television.

In her high school yearbook, Mary was described as “Dark tresses, silence is golden and a good friend to have.”

In 1954, Mary married the love of her life, John David Elias, who went on to become a master watchmaker for Bulova. His work took them to California and Florida, with Mary raising three daughters and running the household. The Eliases retired to Nashville, Tennessee. Prior to Mary’s passing, she resided at Clarendale Bellevue Place, and looked forward to delicious meals and many activities.

Mary had a joyous sense of humor, was a wonderful cook and loved cats. She possessed superior math skills and was a Rummy Tiles champion. Her family says her personality matched that of Sophia (Estelle Getty) on “The Golden Girls,” which happened to be Mary’s favorite TV show.

Traditional hymns and travel were among Mary’s many loves. She frequently accompanied daughter Nancy and son-in-law Ron on cruises and to the beach and was a beloved guest at gatherings at their home. A breast cancer survivor, Mary created over 100 needlepoint tissue-box covers and donated them to the Nashville Breast Center.
Mary is survived by daughters Elizabeth Oliver (David), Linda Webb and Nancy Elias-Oates (Ron), and by a host of grandchildren and great-grandchildren.

Graveside services will be held at a later date with military honors in Arlington National Cemetery. Mary will be reunited with her husband John, who served in the US Navy during World War II.

In Lieu of flowers donations may be made to the Nashville Breast Center, Mary Elias Survivor Support Fund, 2004 Hays Street #310, Nashville TN 37203.
100% of proceeds donated are used to help to offset non-covered expenses for patients in active treatment, as well as other medical needs.

Donations may also be made to Alive Hospice, 1718 Patterson Street, Nashville TN 37203.

For either cause, please note the donation is in memory of Mary Elias, along with your name and address for proper notification.