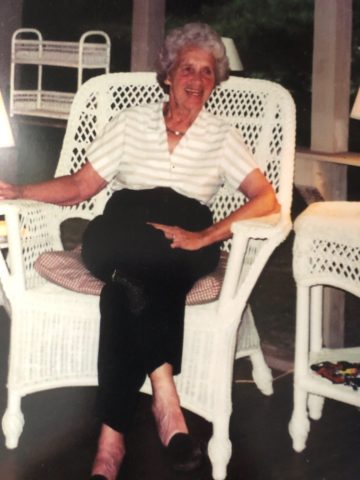 Departed on June 27, 2019 and resided in Nashville, Tennessee

Marguerite Early Fish passed away peacefully on June 27, 2019. She was born May 19,1922 in Louisville, KY
and was raised in Williamsburg, KY.

Marguerite was a graduate of Williamsburg High School and the University of Louisville where she was a
member of Sigma Kappa. After college and during World War ll she joined the Navy and served as a
Lieutenant JG in Washington State for the WAVES ( Women Accepted for Volunteer Emergency Service
Program) for the duration of the war. She married her high school sweetheart after the war and began her
family. Marguerite also began her avocation as a patron of and tireless volunteer for the arts. She was a
docent at the National Gallery in Washington, the High Museum in Atlanta, and her greatest love Cheekwood
Botanical Gardens in Nashville. She made perhaps her greatest contribution working on Cheekwood’s Trees of
Christmas. She was a founding member of the Nashville Opera Guild and in 2008 received the Francis
Robinson Award given to individuals who have made a significant contribution to the Opera. She was a
member of the Daughters of the American Revolution, Centennial Club, Horticultural Society and Immanuel
Baptist Church. She served on the board of the Monteagle Sunday School Assembly. She loved singing for the
Nashville Symphony Chorus in their performances of the Messiah during the Christmas season, and playing
the bells at Westminster Presbyterian Church. She played tennis well into her 80’s.
Her greatest joy was the summers she and Ed spent with a cottage full of family and friends during the Season
at Monteagle Sunday School Assembly. She will be remembered fondly for her ability to make everyone feel
important and welcomed in her home. She wanted a house that was filled with love and laughter. Her legacy
passes this giving spirit on to her children, grandchildren and great-grandchildren.
We, her family, wish to thank the wonderful staff on the 4th floor at Richland Place who treated our mother as
their own. We are so grateful for your gentle care.

She was greatly loved and will be dearly missed.

Services will be held in her cherished summer retreat Monteagle Sunday School Assembly in Warren Chapel
on July 6, 2019 at 1:00 PM followed by a burial in the Monteagle Assembly Cemetery and a reception at
Harton Hall.