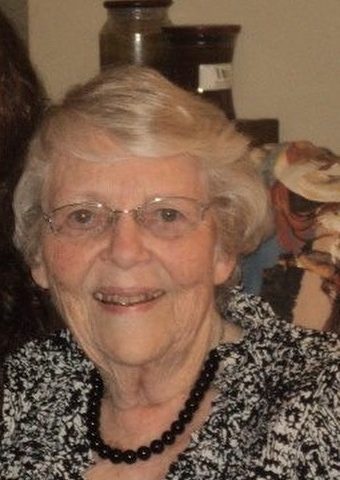 Departed on September 11, 2019 and resided in Franklin, TN

Margaret Jean (Morrill) Pontius died September 11, 2019 at the age of 94. Born May 11, 1925 in Seattle to Frank James and Agnes Morrill, Margaret was an adventurous woman whose service to the church touched many lives across the United States.
Margaret was a life-long baseball fan. Her father played semi-pro baseball in Seattle in the 20's and 30's, and on a business trip with him to Chicago and Detroit in 1938, she met the New York Yankees in the hotel lobby. They spent the evening with Bill Dickey and Joe Gordon, and Margaret got autographs from several players, including Lou Gehrig.

She spent her childhood on Queen Anne Hill in Seattle, graduating from St Nicholas High School. She spent three years at the University of Washington and was in Kappa Kappa Gamma, before transferring to Whitworth College in Spokane, Washington. There she met Lester Pontius, whom she married August 28, 1947. She graduated from Whitworth in 1948.
After graduation, she and Lester embarked on missionary work across the U.S. They moved to Pasadena, where she and Lester served a Korean church together. Margaret was fond of recalling the how the women of the church taught her to make kimchi by burying the ingredients in a jar in the yard.

After Pasadena, the couple was assigned to the Presbyterian mission on the Duck Valley Indian Reservation of the Shoshone and Paiute tribes in Owyhee, Nevada. Her first daughter, Linda, was born in Owyhee. While only in Owyhee a brief three years, Margaret’s work impacted the entire community and she is still remembered by her friends there. The life-long friends that she made in Owyhee traveled with her in spirit and their faces featured prominently on her wall for decades.

After Owyhee, the family moved to New Jersey and spent two years serving a congregation in Forked River, after which they spent two years at the Presbyterian Indian School in Tucson, Arizona. Their second daughter, Tina, was born while they were in Tucson.
After the school closed, the family moved to Washington State, where they eventually settled in Federal Way. Margaret's two best friends growing up were Janet Heshelman Hitchman and Janet Black Wegener. They remained close friends through adulthood, still seeing each other regularly while Margaret lived in Federal Way.

During this time, Margaret ran a preschool at Highline College. She volunteered as a lane judge for both of her daughters' swim meets. Later, she helped with her grandchildren's early elementary education. Margaret lived in Federal Way until 2005, when she moved to Franklin, Tennessee.

Margaret will be buried with her parents in the Morrill family plot on Whidbey Island in Washington State. Memorial service date, time and place to be announced.