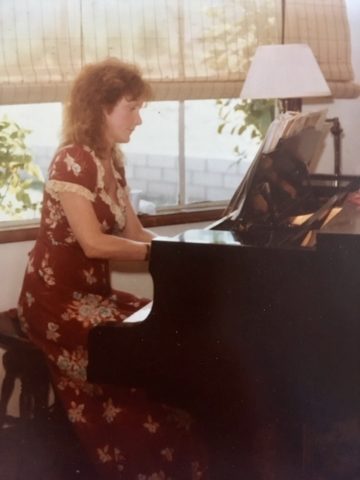 Departed on April 20, 2020 and resided in Nashville, Tennessee

Helen Camille Robbins Mack, 74, of Nashville, Tennessee, passed away peacefully at home on Monday, April 20, 2020. Born April 16, 1946 in Memphis, Tennessee, she was the daughter of the late John William Robbins and Virginia Tate Robbins. She is survived by her twin brother, John A. Robbins of Nashville, Tennessee, and her three daughters: Sunrisa Mack of Seward, Alaska; Kiriana Mack-Hansen of St. Louis, Missouri; and Vanessa Harrington and husband Joseph Harrington of Franklin, Tennessee; as well as two granddaughters, Chloe and Lily Harrington. She has many surviving cousins, nieces and nephews as well as loved ones in Texas, California and Tennessee.

Growing up in Dyersburg, Tennessee, she became an accomplished pianist early on in life, even being called from school as a teenager to play organ for special services at her Methodist church. Camille decided to continue her education in music after being awarded a summer scholarship to the Cincinnati Conservatory of Music, and ultimately graduated with a Bachelor of Arts degree from the University of Mississippi in 1968, where she was a proud member of the Delta Gamma sorority. Camille went on to teach and share her love for music in Houston, Santa Barbara, and Nashville. She spoke of her piano students fondly throughout the years and her three daughters are eternally grateful to her for ensuring that music remained a strong part of their lives. In addition to music, Camille was a successful Realtor in Santa Barbara and mortgage loan officer in Nashville. Above all, she was a unique and beautiful soul filled with unending love.

Camille was laid to rest at the Santa Barbara Cemetery in California beside her beloved late husband, Robert Thomas Mack, overlooking the ocean that she treasured so dearly.

In lieu of flowers memorial donations may be made to The Nashville Symphony, Nashville Ballet, or Nashville Humane Association.