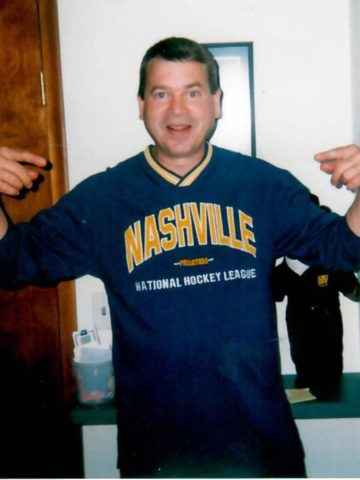 Departed on October 5, 2018 and resided in Nashville, Tennessee

Greg Diroff, age 62, passed away suddenly on Friday, October 5th, 2018 in Nashville, TN. Greg was born and raised in Allen Park, MI and has blessed the Nashville community with love and laughter for the last 45 years. His overflowing generosity, sharp wit, unbelievable sense of humor, and endless compassion will be greatly missed by all who knew him.
He is preceded in death by his parents Mary Helen and Lawrence Alfred Diroff. He is survived by his daughters and sons-in-law Laura Yankee (Jon), Emily Stefanick (Noah), Theresa Benedikter (Mike), Ruthie Wehby (Kevin), and his fiancé Joni Simpson. He also leaves behind 13 grandchildren who absolutely adored him and were adored in return: Benjamin, Delton, Jane Emily, Ainsley, Emery, Isaac, Olivia, Uma, Yates, George, Sebastian, Rachel, and Kayla. He will be greatly missed by his siblings, Mary Brennan (Bill), Pete Diroff (Tracey), Tom Diroff (Mandy), Leo Diroff, Bob Diroff (Raquel), and Ed Diroff. He leaves behind numerous nieces, nephews, cousins, and many dear friends whose lives he impacted more than he knew.

Greg was always quick with a joke and loved to banter with anyone. He had a way of helping people laugh in any situation, good or bad (but especially bad). Fortunately, he had the ability to pull off his absolutely twisted sense of humor because of his impeccable timing and contagious laughter. He knew how to tell a story in a way that would make you laugh so hard your gut hurt. Greg was ever the prankster. Just last week, he designed and installed an inconspicuous “prank machine” at work to scare co-workers and capture their reactions on camera. This is just one of hundreds of stories that people have to tell about him. If you knew Greg, you couldn’t help but love him.

He was a man of many talents, from carpenter to softball coach, master of pyrotechnics to amateur meteorologist. He always had the answers to any home improvement questions, and when in doubt, would slap on liquid nails. Through coaching his daughters’ sports teams, he instilled in them what it means to be a good sport, lose with dignity, and take the high road even when the going gets tough. The Fourth of July lasted all year at Greg’s house, as he took any excuse to shoot off fireworks no matter the season. Known by his daughters as “Doppler Dad” he would call well in advance of a storm system to warn “Lookit, nobody needs to be out driving in this.” A genuine example of selflessness, he thought of others first in almost everything he did. He often made sure to accommodate everyone else’s schedule before his own. He frequently said, “Whatever works best for you. Just let me know.”

Greg was the definition of the oldest brother from his youth through his last day. He was the responsible one, always helping his mom with his siblings. His "older brother" personality extended to all of the people lucky enough to be in his life. Greg would take a crying baby from a mother that he didn't know in church and walk right into the cry room. Who else could do that?
His greatest accomplishment in life was raising his four daughters. Greg spoke constantly with utmost pride about his girls and their families. He was the best mentor and friend to the sons-in-law that loved him like a father. He was a fixture at family cookouts, grandparent’s days, Baptisms, and birthday parties. If it involved his children or grandchildren, he was there. He is already missed more than one could imagine.

Visitation and Funeral Mass will be held at St. Henry Catholic Church. Visitation will begin on Thursday, October 11 from 5:00 - 7:00 PM with a recitation of the Rosary at 7 o’clock. A brief visitation on Friday, October 12 at 10:00 AM will precede the 11:00 AM Funeral Mass. Cremation burial immediately following at Harpeth Hills Memory Gardens. The family requests that in lieu of flowers, donations be made to St. Cecilia Academy Megan Whaley Scholarship Fund. Additionally, they request that everyone “Keep smiling, people will wonder what you are up to!”