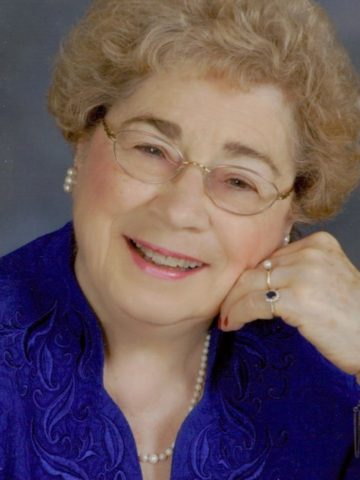 Departed on January 14, 2020 and resided in Nashville, Tennessee

Evelyn was born in Atlanta, GA and lived her formative years in Chattanooga, TN. She graduated from The University of Chattanooga with a degree in Education. After moving to Nashville, Evelyn began her career as a teacher in Math, Science, and Music at John Overton High School prior to the building of McMurray Middle School where she remained as a beloved teacher until her retirement in 1989. She was active in school clubs and activities and sponsored the Student Council for many years.
Evelyn taught piano to local area students for over 20 years. She was also the organist at Hillcrest United Methodist Church.

Evelyn was a member of Arlington United Methodist Church for 48 years. She founded the Altar Guild and chaired for the majority of those years. She was also a member of the choir and mentored the Acolytes in the church. She was actively involved with VBS either with music or teaching. She was also a member of The Wesleyan Service Guild prior to United Methodist Women. She held many positions over the years including District Officers. She performed volunteer work for several organizations, Community Care Fellowship and Miriam’s Promise to name a few.
Evelyn was also an active member of Christian Women United, DAR, Red Hat Society, TN State Museum, Nashville Symphony, American Ex-Pow’s, MNRTA, and McMurray Middle Retired Teachers.

The family would like to express our appreciation to all the staff at NHC Place at The Trace and Caris Hospice for the wonderful care and attention she received during her 3 ½ year stay. You truly embraced her as family.

Donations can be made to Community Care Fellowship, Miriam’s Promise, or a charity of your choice.