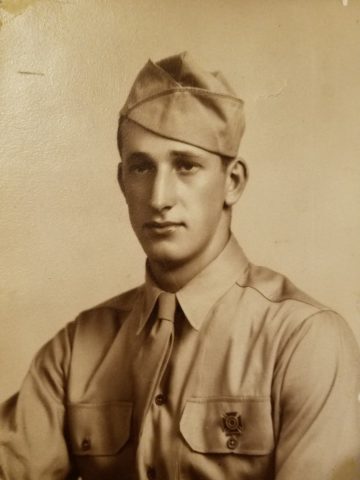 Born in Elizabethtown, Kentucky on September 2, 1925

Departed on July 14, 2019 and resided in Franklin, Tennessee

Elmo Barry, age 93, completed his earthly journey to be with God on July 14, 2019. He was preceded in death by his wife, Helen Barry and son, Brent Barry. He is survived by sons, Mark and Rob Barry; daughters, Lisa Barry and Jan Dossey; three grandchildren, Brooke (Dustin) Lilly, Brandon (Brandi) Barry, and Anaea Dossey; great-grandchildren, Taylor, Smoltz and Carolina Lilly.

Elmo was born in Elizabethtown, Kentucky where he was raised by his parents, Everett Miron and Edith Craig Barry on a dairy farm. He had 9 siblings; Sibyl, Juanita, James, Edna, Harold, Evelyn, Josephine, Willard (Buddy), and Loeta. Elmo served in the Army (21st Infantry, L Company) in World War II. He was stationed in the Philippine Islands and Japan. He was the honor guard at the Commanding General’s Headquarters in Okayama, Japan.

Elmo attended Western Kentucky University and earned his Bachelor of Arts Degree. This is where he met his wife Helen. They fell in love and got married on August 28, 1948. He taught Instrumental Music in Risco, Missouri; Greenville, Kentucky; and Nashville, Tennessee for 36 years. While in Nashville, he earned his Master’s Degree at George Peabody University. He served as the Executive Secretary Treasurer of Middle Tennessee School Band and Orchestra Association for 19 years. He also served as Minister of Music at Crievewood Baptist Church. Our family then became members of Brentwood Baptist Church for several years. When Elmo and Helen moved to their new home in Franklin, they became members of First Baptist Church in Franklin where he played trombone in the orchestra. It was after joining Forest Hills Baptist Church where he led the singing for Wednesday night Prayer Meeting that church life came full circle.

Elmo loved playing golf and working with wood. He restored many pieces of furniture and built many clocks. His passion was also gardening on the five-acre plot of land where their home was in Franklin. He loved reading historical and biographical books. He also loved playing trombone and singing.
Camping, cooking over a Coleman stove and going to historic places were always the family’s summer vacations. The Barry family always enjoyed picnics by the road and setting up camp each night. After retirement from teaching, Elmo and Helen began to travel all over Europe and Canada. They took their grandchildren on road trips to teach them about the history of our country.

Here are some stories from his grandchildren:
Brooke said, “I loved his passion for watching sports. He never ceased to amaze me with his knowledge on the latest even up until the end, as he discussed sports with Dustin (Dustin loved this about him). He never held back on a positive thought of his children. He felt like we needed to know that he was proud. I enjoyed watching him interact with the other residents and humming a tune as he rode the scooter to the dining room. He usually had a nugget of wisdom for my kids….I’ll never forget him looking at Taylor one time and pointing at her phone and saying, “that device will steal your time” or telling Smoltz “first you must be a good student, THEN a good ball player….now make me proud Coach!”
Brandon said, “When I was growing up, Popee was my hero. He was the strongest man I knew. He knew how to do anything around the outside of the house. He was strong, smart and loving to me. I cherish the memories of road trips and camping with Grandma and him. I laugh thinking about he and I shooting BB’s at deer to scare them out of the garden. I’ll never forget the time he spent with me in his workshop teaching me how to use all the tools and letting me help him fix things.”
Anaea said, “Some of my favorite memories were made at 4260 Warren Road. I remember early mornings sitting on the counter next to the coffee grinder and getting so excited when Poppy would let me press the button. When the grandfather clock needed to be wound, he would look at me very seriously and say “I have a very important task for you” and I would get to pull all the chains. He told me so many jokes and acted surprised that I understood them. He would say to me “I can explain them to you if you don’t get them”. In the fall, I would often help Grammy rake the leaves. She would use the big rake and I would use the little rake. After I finished raking, Poppy would hold my hand as I climbed up the rock wall by the driveway. I remember being so proud of myself when Poppy let me climb it by myself. I’ll never forget his nickname for me, ABCD, his scratchy kisses, and how sometimes he hugged me so hard my back cracked.”
Elmo was a godly and wise role model, husband, father, grandfather and great-grandfather. He was a great example to all of his children and his motto was: Never give up!