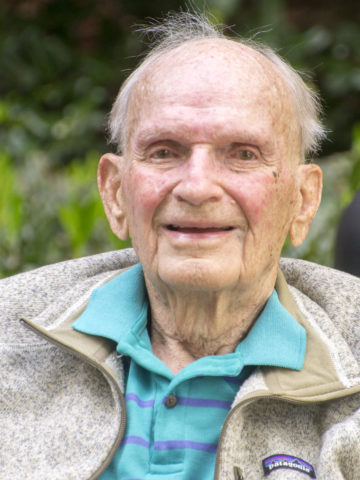 Departed on October 27, 2018 and resided in Nashville, Tennessee

He was predeceased by his son, Barry Earl Traughber, his daughter, Leslie Elizabeth Traughber LeRoy and his sister, Sara Ann Traughber Oakley.
Les was a kind, fun loving, true gentleman, an outstanding physician, and loving husband and father with a great smile and a true wit. In 1939 at age 17, he joined the Tennessee National Guard Medical Attachment of the 117th Infantry 30th Division. He was inducted into National Service Sept 16, 1940 and was stationed at Fort Jackson, SC. After Pearl Harbor, he became a fighter pilot and served as a flight leader with the 27th Fighter Bomber Group and led 114 combat missions. He was shot down after his 35th mission and immediately returned to duty in Italy and southern France. His Group received 4 Presidential Citations, and he received the Distinguished Flying Cross Air Medal with 5 stars. After the war, he attended Vanderbilt University and completed Medical School at the University of Tennessee Memphis. Les was a Founder of the Anesthesia Group at St. Thomas Hospital where he practiced for 30 years before retiring in 1987. Les was an avid golfer and recorded 6 holes-in-one after age 65. He was a long-standing member of Hillwood Country Club. He and Pat traveled all over the world, including visiting many old sites where he flew missions in WWII. Les lived life to the fullest and leaves behind great memories for his family, many friends, and anyone who met him. His life has been one for all to emulate and admire.

His family would especially like to thank the staff at Brookdale Green Hills.

A graveside memorial service for family and friends will take place at Harpeth Hills Memory Gardens at 1 p.m. on Saturday, November 17, 2018. A reception will follow at The Pavilion at Harpeth Hills.