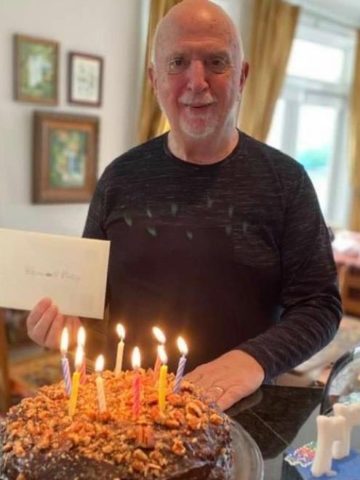 William Douglas O’Rear (Doug) of Ashland City, Tennessee died on Thursday, July 30, at St. Thomas West Hospital of COVID-19. He was 77 years old. The family is grateful for the kind and attentive care that Doug received as he battled this terrible virus. Though he initially downplayed the severity of the virus, he did take precautions when out of his home and his wish from his hospital bed was that his hospitalization would serve as a testimony to how terrible a COVID-19 infection can be.
Doug is survived by his wife, Jane Crisp, his children, Chris (Lynda), Michael (Julie), Casey Rapp, and Robert A. Crisp (Audrey Love), his 11 grand-children – Rachel, Jessie, Elizabeth, Michael, Jacob, Anna Grace, Mary Catherine, Katy Grace, Johnathan, Sydney, and Dru – and his 3 great grandchildren – Mason, Michael, and Malory. Doug is also survived by his sisters, Beth Edge (Clabourn) and Reba Little of Atlanta, Georgia and his nieces and nephews, Lauren Yeager, Michael Yeager, Daniel Kumatz, Adam Kumatz, Trey Jones, and Brady Little.
Doug was born on May 13, 1943 in Jasper, Alabama to Oscar and Blanche Mullins O’Rear. Education was a priority for Doug, his children, and grandchildren. After completing two years at Walker Junior College in Jasper, Doug received his B.S. from Samford University in Birmingham, Alabama and his M.A. from the University of Alabama. He completed extensive graduate work at the University of Alabama and the Cumberland School of Law at Samford University.
Doug’s early career was spent in personnel administration with several organizations including the Alabama Power Company, The University of Alabama, and the former First American Bank in Nashville. He was also an Assistant Professor of Business at Belmont University. Since 1980, Doug has been involved in financial planning. He became a Certified Financial Planner and in 1983 he opened his own business, Doug O’Rear & Associates. In his role as financial planner, Doug was a frequent management and financial consultant with various for profit and non-profit organizations. Doug’s friends became his clients and his clients were his friends. He cared for each person as he would for a family member and was notorious for his work with clients regardless of their net worth. He was more concerned about an individual’s needs. Doug was known for his kindness and generosity, giving of his time and resources to multiple non-profit organizations. Doug’s life and enjoyment was in his work and he was working until the day he was hospitalized. Doug was also a member of the Kiwanis Club and the Middle Tennessee Financial Planning Association, having served in leadership and officer roles with both.
Beyond Doug’s work, or perhaps woven through it, he was known for his strong faith in Jesus. He sought to be a man of principle, generosity, hard work, and kindness. Doug served in various volunteer and leadership positions at First Baptist Church, Tuscaloosa, Alabama, Woodmont and Harpeth Heights Baptist Churches in Nashville, Tennessee. In the early 1990’s Doug began attending Pegram United Methodist Church in Pegram, Tennessee. He became a Lay Speaker in the United Methodist Church and then a Licensed Local Pastor. He completed Licensed Local Pastor training at Martin Methodist College while serving as Pastor of Craggie Hope United Methodist Church in Kingston Springs, Tennessee, Eno and Oak Grove United Methodist Churches in Dickson, Tennessee.
Doug was a person of integrity and the person that he was shown through everything he did. He was the same person in every setting in which he worked and served. He loved the simple things of life. He enjoyed taking a grandchild with him on his Saturday errands to Costco or some other location in his ’72 Mercedes convertible, his old pickup truck or his new Tesla. He and Jane owned Chigger Ridge farm in Pegram, Tennessee for years until they sold it to Cumberland Heights treatment center for their Arch Academy. When they owned Chigger Ridge, Doug and Jane enjoyed meeting all kinds of people from around the world in the Bed & Breakfast that they ran there. Doug and Jane also traveled extensively across the United States visiting all 50 states, and around the world including trips to Europe, China, Egypt, the Holy Land, South Africa, Australia and New Zealand. Doug and Jane also kept horses on the farm and enjoyed traveling across Tennessee to various horse shows with their grandchildren over the years. Doug enjoyed participating in the annual 4th of July parade and activities in Pegram. He did not know a stranger and would often strike up conversations with any random person wherever he was. Doug would often carry $2 bills and used them to pay for items or to tip servers. He believed they were great conversation starters and regularly gave birthday and Christmas gifts of bundles of $2 bills. Doug was notorious for his bad jokes, his quirky shirts and hats, his love of Alabama football and some eccentric ways, but he was a caring, generous, Christian man with a kind heart and love of life and people.
Because of COVID-19, we will celebrate Doug’s life and memory at a later date. In lieu of flowers, memorial gifts can be made to any of the following charitable organizations:
• ARK Community Resource Center in Pegram, Tennessee
• Bethesda Center in Ashland City, Tennessee
• The Help Center in Dickson, Tennessee
• Nashville Rescue Mission
• Second Harvest Food Bank
• United Methodist Committee on Relief (UMCOR Disaster Relief Fund)
• Braxton Lee Homestead Foundation
• Kiwanis Eliminate Project
• Craggie Hope, Eno, or Oak Grove United M