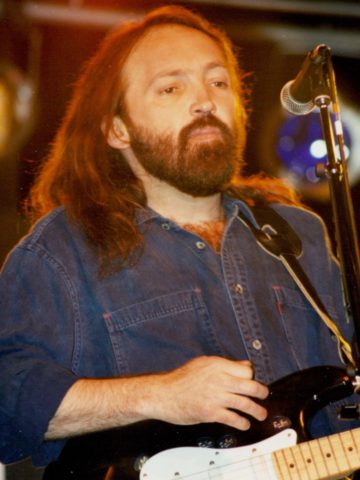 Departed on August 11, 2018 and resided in Franklin, Tennessee

On Saturday, August 11, Blue was rescued from his earthly trials and tribulations and passed into the arms of our Lord and Savior.
He was born in Detroit,Michigan to William and Shirley Mueller and is survived by his wife Beth, daughter Leigha Brandon and husband Keith, sisters Judy Anderson and husband Ray, Nancy Keves, Patti-“Hey Kid” Gallagher and husband Art, and brother Jim Mueller and wife Linda, sisters and brothers in-law, Carol Price, Katie and Allen Snider, Bill Hamilton and Seretha Brooks, numerous aunts, uncles, nephews, nieces, and cousins, and those throughout his life who have staked their claims to be family.

Blue started his illustrious and prestigious musical career at an early age and “hit the road” at age 16, with a permission slip from his parents. He has performed with, produced, and recorded numerous artists around the world, also stepping out to front his own band or to perform solo, and his career, his life, was so noted with accolades, awards, and much respect and love. Blue never met a stranger. He loved everyone he met, and if he met you once, he’d remember you. He was a gentleman. He was humble and shy, until he stepped on stage or in the studio where he ruled.
He was an extraordinaire guitarist, vocalist, and songwriter, able to put on paper and then deliver words and music straight from his heart to yours. “The best, the most beautiful things in the world cannot be seen or even touched...they must be felt with the heart”.

Blueman, know that the love and care you gave to everyone in your life will sustain them. You will never be forgotten.

In lieu of flowers donations may be made to The Hunter Worley Foundation in Chattanooga, TN, 37401