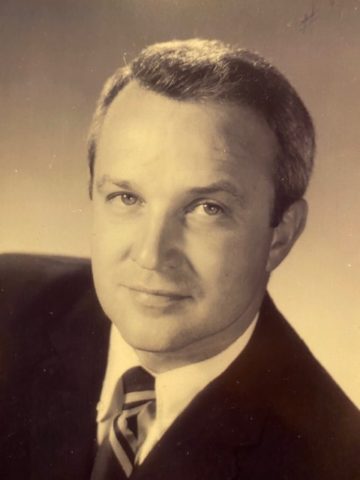 Departed on January 1, 2021 and resided in Nashville, TN

Albert Hale Hooper, Jr. (Hale) passed away peacefully on New Year’s Day, 2021. He was 87 years of age. Hale was one of the kindest, nicest, most honorable men anyone ever knew. Hale never met a stranger. He was blessed with many devoted friends throughout his life. Hale was a true gentleman.
A native Nashvillian, Hale attended West High School, where he was a star athlete, both in baseball and football. After serving 2 years of duty in the US Army during the Korean War, Hale played 4 years of baseball at Vanderbilt, where he was a starting pitcher and second baseman. As a pitcher, Hale threw a mean curveball and a wicked knuckleball. At the plate, Hale was the leadoff hitter for Vanderbilt. He had a tendency to squat down low to minimize the strike zone. Hence, he was nicknamed “Squatlow” by his teammates, and he retained that nickname among his buddies throughout his life. Hale loved to regale others with stories from his glory years at Vandy, playing alongside his lifelong friends Charlie Hawkins, Jimmy Miller & many others. He was a proud member of Kappa Sigma fraternity at Vanderbilt, where he made many enduring friendships. Hale was an avid, impassioned Vanderbilt sports fan and supporter his entire life. Hale was a Vandy man if there ever was one.
After graduating from Vanderbilt with an economics degree and later obtaining his law degree from Nashville School of Law, Hale began his career as an executive at Genesco, where he worked for 10 years. In 1965, he left Genesco and founded Fridrich & Hooper Realty with his good friend, Jerry Fridrich. As President of the real estate group, Hale assembled a dedicated team of top realtors, soon becoming the leading real estate firm in Nashville. As the firm’s top producer, Hale quickly earned a reputation for his honesty and passion for his clients and for his kindness and support for his agents. In 1986, he left Fridrich & Hooper for a new challenge, heading the real estate group at Town & Country Realty, where he quickly transformed the company into a market leader. Later in his career, he worked as a senior loan officer at PNC Bank and at Regions Bank.
In 1961, Hale met the love of his life, Nancy Carolyn Cole, at a baseball game. It was fate, and it was true love. Hale and Nancy were happily married for more than 59 years, raising two loving sons, Hale and Steven. A gifted athlete, Hale passed his passion for sports on to his boys and was often their coach and always their biggest fan, never missing a game in which they played. He was so proud of his boys.
Hale’s dedication to his family was paramount, and he beamed no brighter than when he talked about his boys or his dear grandchildren. Their success was his success, and his supreme joy.
Hale was a lifelong member at Hillwood Country Club, serving as President in 1976. An avid tennis player and golfer, Hale spent countless afternoons at Hillwood with his golf buddies and his sons, where his affable smile and kind demeanor were known to all.
Hale was a deeply devoted, Christian man. He was an active member of Belle Meade Methodist Church and, later in life, at Woodmont Christian Church, where he practiced his faith until his death.
He was preceded in death by his father, Albert Hale Hooper, Sr., his mother Evelyn Wood Hooper, and his brother Charles Walter Hooper. He is survived by his beloved wife Nancy, his sons Hale (Tina) and Steven (Laurie), his sister Carole Hooper Francis, and 6 grandchildren: Everett, Anna, Lela, Cole, Katie & Griffin.
The family will have a private service at Woodmont Christian Church, Nashville, TN. The family will also hold a memorial service for friends and family at a later date. Memorial contributions may be made to Woodmont Christian Church, 3601 Hillsboro Pike, Nashville, TN 37215. “www.woodmontchristian.org”